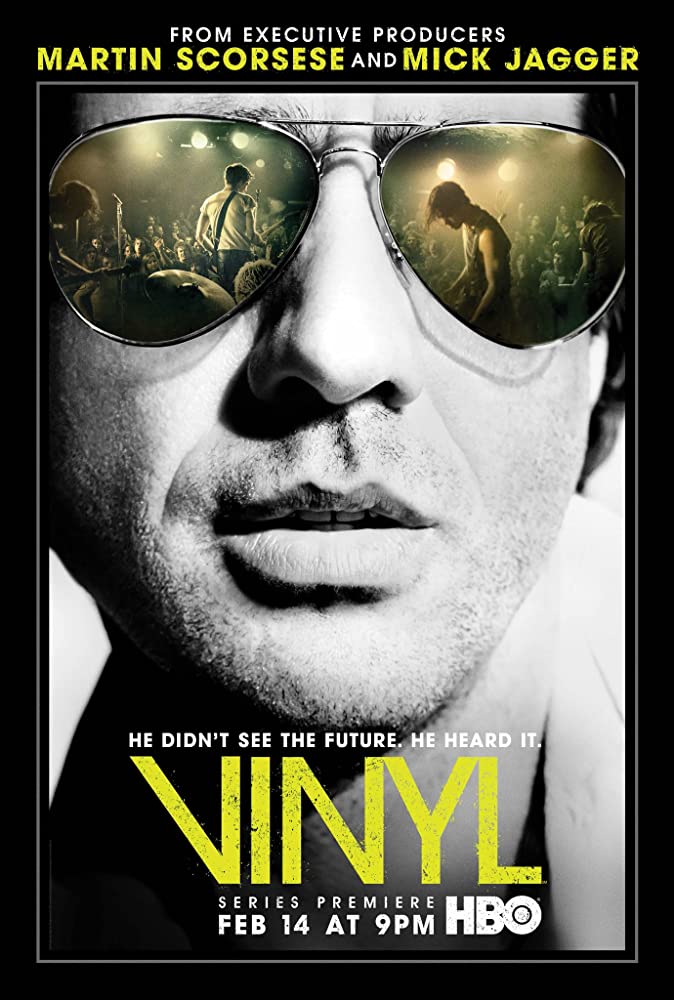 Vinyl was an HBO show that ran for a single 10-episode season in 2016 before getting yanked. I’m only coming around to watching it now, as it popped up on Crave, which is the only streaming service I subscribe to (nobody else carries Frasier….the nerve). Crave’s catalogue includes a bunch of HBO and Showtime shows, but you need a bonus subscription or some up-selling bullshit like that for the in-demand stuff like Game of Thrones.

For my plaebian $10/mo. subscription tier, I get old shows from their dumpster, and r/assholedesign stuff like the first 3 seasons of Silicon Valley, but not the last 3. Well, the joke’s on Crave, because I downloaded Season 4 ages ago and am pretty sure I watched Season 6 on the in-flight entertainment system while semi-comatose on a 16-hour flight from Toronto to Dubai.

Anyway, back to Vinyl.

It should be great on paper; a show about an NYC record company reinventing itself in 1973, with glam rock, disco and punk rock just around the corner. The show can mine a rich vein of American music history, so as premises go, it’s certainly more compelling than Hulu’s 2020 reboot of High Fidelity, where the viewer is supposed to think that the child of Lenny Kravitz and Lisa Bonet is a ‘loser’ layabout that runs a record store.

Vinyl has potential and tons of it. Bobby Carnavale plays label boss Richie Finestra, who sabotages a very lucrative sale of his American Century label to Polygram, which pisses off all his partners, who don’t share Richie’s faith in the label’s survival, and who suspect that he’s fallen off the wagon again (which he has).

As awful as the haircuts, wigs, clothing the mutton chops in particular are, they still cannot detract from his strong performance as a drug-addled, rage-fuelled and often unsympathetic label boss whose life is falling apart.

But that’s part of the problem. The show is set up to have moments of levity and humor, and there is none whatsoever. Instead, script time is split across numerous plotlines running in parallel, full of dialogue from bit part chracters whose stories find no resolution by the time the 10th episode rolls around.

A young office aide discovers a ramshackle punk group, Nasty Bits; a snooty Yale grad A&R man gets demoted and accidentally stumbles across disco and Afrobeat while working with Latino and African American employees in the mail room. Finestra’s wife tires of her husband’s inability to get sober and tries to reconnect with her past as an NYC boheme in Andy Warhol’s Factory entourage.

Each of these are promising subplots, but what detracts from all of them that is the overly complicated main plot. It could have limited to Richie’s manic struggle to revive the label’s fortunes and win over his increasingly suspicious partners.

But no, there’s also a murder and a cover-up, which leads to the involvement of a local mob boss. This storyline takes up space in every episode, and is no doubt the handiwork of executive producer Martin Scorcese, who apparently cannot participate in anything that doesn’t involve the mafia. This side of the plot is violent and heavy; it hangs around the show’s neck like a one-ton anchor, draining it completely of any camaraderie and humor.

What’s frustrating about it is that it takes pretty much all 10 episodes for it to come together. And right when it looks like it’s getting good, the show’s ends, and is gone forever. And it’s a huge waste because there are 3-4 episodes in the middle of the season where it feels like nothing of substance is happening.

It’s a shame because the most interesting subplot appears right at the end; Richie sits in a dive bar that the owner tells him will soon become a live music venue; “The CBGBs” is going to be it’s new name. Additionally, Richie’s partner, stung by his reputation as an out of touch money man rather than a talent spotter, discovers a musician that you just know is going to be based on real-life failed Bowie ripoff Jobriath.

If you’ve never heard of Jobriath, there’s an excellent , if highly tongue-in-cheek article on it from the “old internet” site Something Awful…just skip to the Jobriath section. Read that article and tell me that story arc wouldn’t have been magnificent.

There’s plenty of good music featured on the show as well. Here’re some of the tunes I remember:

plus a bunch of older ‘50s and ‘60s rock n roll, soul and blues stuff I didn’t recognize.

Oh, the show also has plenty of cameos by rockstars of yore. None of them looked much like their counterparts except maybe the guy playing Bowie. Just as a heads up, there is no Bowie-centric plotline at all; that said, he, Alice Cooper and Led Zeppelin all have 3-4 lines in the show. The subplot with Alice Cooper is mildly humorous as the setup for how the douchey Yale grad A&R rep loses his job.