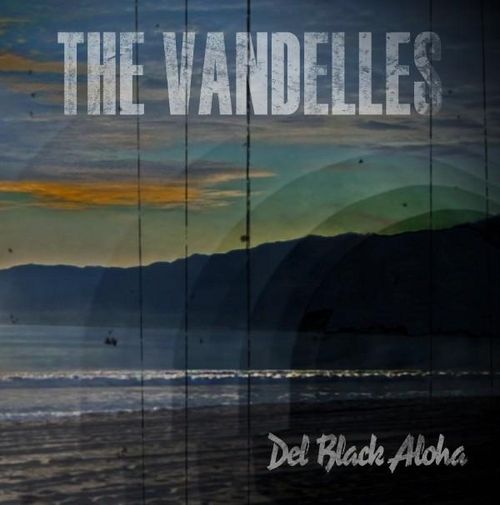 On their debut full-length, The Vandelles are happy to continue their pillaging of the “evil-surf rock in B-Minor” territory  explored by early Raveonettes. Dark, rumbling, layers of noise and fuzz permeate every aspect of the record, as though a zombie Buddy Holly melody was playing through a broken radio in a ruins of a house in post-apocalyptic suburbia. Had they formed a few years earlier, I could see them being approached to write the score for Fallout 3.

If Sonic Youth listed to the Cramps and The Gun Club as opposed to Swans and Glenn Branca, they might have sounded a lot like the Vandelles. Now that I say it though, that’s basically what the Raveonettes were doing back in the day; several moments on DBA are lifted almost wholesale from Whip it On, including “Roving Rex” (“Bowels of the Beast”) and “Get Down” (“Cops on our Tail” or “Beat City”). Still, the Vandelles provide this level of dystopian psychobilly over an entire full-length, which is something of a plus, seeing as how the Raveonettes themselves moved on quickly to a different sound after a couple of EPs and singles worth of this kind of material.

“Chain Walking” and “Blue LA Strip” combine the nostalgic, syrupy sweet melodies of ‘60s girl bands with a healthy serving of lo-fi Hawaiian guitars and, barbed wire distortion. “California Killer” throws in the faraway vocals and the heroin-like slurred euphoria of Psychocandy-era Jesus and Mary Chain. “Bomb the Surf” and “Bad Volcano” are decently menacing surf instrumentals; if you thought Dick Dale’s take on the Batman theme felt tame, dated and overall unsuitable to score your movie’s vintage serial killer getaway scene, give these a try.

Of the 12 tracks on Del Black Aloha, 3 tracks, (“Lovely Weather”, “Fever of the Beat” and “Die for it Cowboy”) previously appeared on their 2007 self-titled EP.

Overall, DBA is too predictable to merit a solid recommendation. That said, the shoegaze supermarket is poorly stocked when it comes to the “surf-noir/trashy post-punk/noise-pop” niche. A lot of the limitations of this record are applicable to Whip it On as well, and that hasn’t stopped me from attempting to wreck my hearing with “Beat City” at least a couple of times a month. Execution is what matters here, and both the Raveonettes and Vandelles do a better job than groups like Singapore Sling, that operates in the same space, but with far more tedious results.