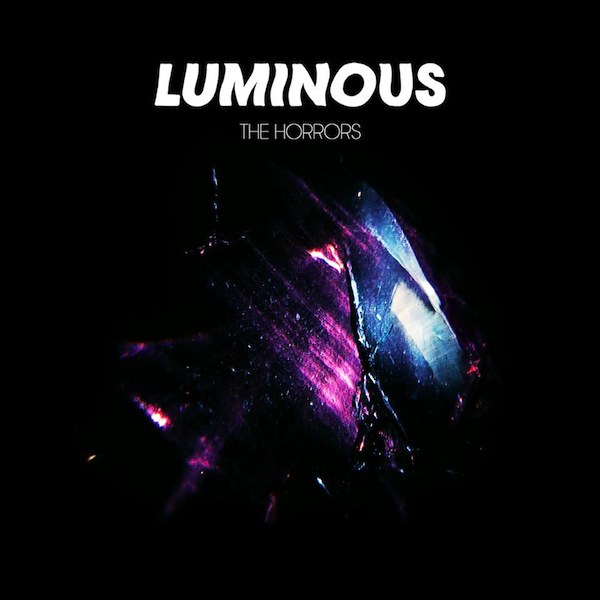 A significant refinement of their sound, with enough pop leanings to foreshadow a full-on pitch for mainstream acceptance

A dispassionate rundown of the Horrors’ output up until now:

I wasn’t thrilled by the more subdued dream pop of Skying. So enamored was I of Primary Colours that my childish sense of entitlement led me to feel a tiny bit of betrayal when the band’s sound changed so dramatically. I imagine it was akin to what fans of early Horrors felt when they shifted gears from sounding like a more fashionably dressed 80’s Matchbox B-Line Disaster to the wall-of-sound guitars and synths that attracted me in the first place.

So, in theory, I should feel bad that Luminous is an extension of that sound, as opposed to yet another sonic and thematic reinvention. Fortunately though, the record is far more immediate than Skying, as you could probably tell from the lead single “So Now you Know”, which sounds like Suede if their sonic motif tried to replicate mescaline-fueled stargazing as opposed to the low-rent glamour of the English working class.

Album opener “Chasing Shadows” starts with far too long of a buildup though, which worried me a bit as the genre tag of “neo psychedelia” is all too often a fig leaf for extended jams with no particular structure. Thankfully, “First Day of Spring” gets things back on track with a catchy Chameleons-inspired jangle; the bass line is so Stone Roses you’d think Faris Badwan’s increasingly polished vocals were floating over Mani’s bass at a show at Factory Records’ Hacienda venue in 1989. “In and Out of Sight” comes off as similarly Madchester-inspired, with the guitar drone and bass not unlike something I might have heard on the arguably definitive “baggy” record, Happy Mondays’ Pills Thrills and Bellyaches (1991).

Halfway through the album, I began to visualize the Horror’s career trajectory as more and more like that of The Verve. If Primary Colours was their early shoegaze album (A Storm in Heaven, 1993) and Skying was the experimental, psych-leaning No Come Down (1994), then Luminous is like A Northern Soul (1995), a significant refinement of their sound, with enough pop leanings to foreshadow a full-on pitch for mainstream acceptance a la “Bittersweet Symphony”.

This is clearer than ever on “I See You”, the second single off the album and just so darn catchy and sweet that you’d have a hard time convincing anyone who’d heard the Horrors between 2007-09 that it was the same band. That said, the album version of the song clocks in at an unnecessary 7.5 minutes, something that also weighed down tracks on Skying.

Still, I was a bit “meh” on this album until the last two tracks. “Mine and Yours” and “Sleepwalk” reminded me that few contemporary bands can stuff as much atmosphere into their tracks as the Horrors can. The former is again reminiscent of the noisy glam rock of early Suede, replete with Bernard Butler-like piercing guitar notes. “Sleepwalk” is a great closer, a slice of sonically dense chamber pop that steals a bit from Spiritualized, while maintaining a distinctively Horrors-like sound.

There’s much more for the neutrals to dig their teeth into than than Skying, but mostly because The Horrors don’t take a lot of risks. While the record as a whole is pretty enjoyable, part of me feels like the band has lost a bit of the sense of adventure that made them so compelling. At its core, this is a record deeply indebted to the sound and mood of ‘80s/early ‘90s British ecstasy-pop. While the same could be said of Primary Colours, the impact of that album is markedly different because no one expected a seemingly trend-whoring goth band to come out with a tribute to post-punk, shoegaze and Neu! style Krautrock all at once. Plus, that album had “Sea Within a Sea”, possibly the finest 8 minutes ever committed to tape by a band that likely pay more for a haircut than a fuzz pedal. So it gets a pass.