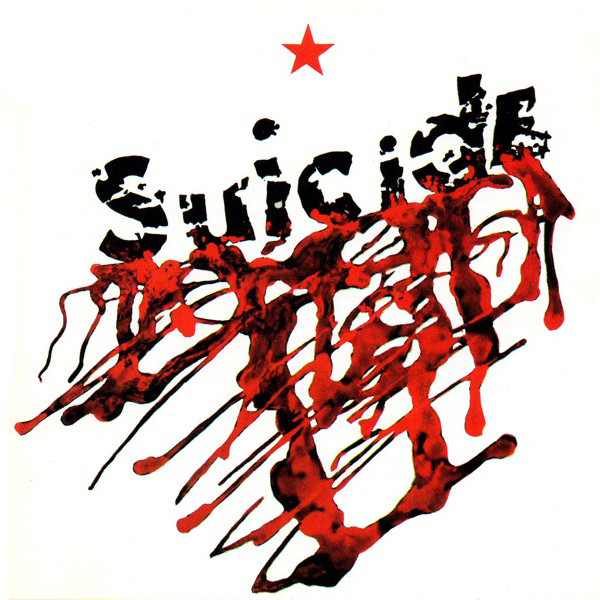 Vocalist Alan Vega and keyboardist Martin Rev formed one of the oddest ensembles in late ’70s rock counterculture. They had no guitarist and no drummer; their music consisted entirely of dark, dissonant and outright ugly keyboard rhythms, set to the percussive drone of a drum machine. The band’s name was based off of an issue of the Ghost Rider comics series (“Satan Suicide”), but that wouldn’t have been apparent to anyone who found themselves gazing at this album’s blood-spattered artwork.

‘Ghost Rider’ is in fact the very first track and sets the foundations for synthpop, industrial and new wave within a mere 2:30. The throbbing 808 monotone and a staccato, buzzing keyboard refrain are all that fuel the song, as Alan Vega’s ghostly rockabilly drawl and surreal lyrics create an atmosphere of post-apocalyptic noir.‘Rocket USA’ has Vega toning down the vocal theatrics to match the quietly menacing pulse of Rev’s keyboards and the ghostly kick of the drum machine.

Suicide’s minimalism can be compared to Closer-era Joy Division. While the groups were poles apart both physically (New York and Manchester) and musically, both were adept at building a sense of brooding tension in their music. Vega’s years on the NYC art circuit gave him a taste for the outlandish. Like Lou Reed, he managed to work it into the band’s sleazy, back-alley concoctions with ease. It’s best seen on cuts like ‘Johnny’ which features an out-of-the-blue barbershop melody-inspired flanged keyboards , with Vega channeling his inner Elvis like a shaman possessed.

‘Cheree’ is the one time some vulnerability is allowed to slip through this leather-clad fortress of nihilistic cool. The shimmering organs and twinkling keyboards feature a level of production that (a likely zombiefied) Phil Spector would have been proud of. Unlike many of his ‘punk’ contemporaries, Vega’s vocals weren’t limited to tuneless hollering or manic screaming; he’s taken enough cues from David Bowie to know that his trembling, breathy vocal style works best with a slight glam tinge, creating a stark contrast to the cold, spare musical arrangements.

And nihilistic they were, make no mistake. Suicide’s live performances are legendary for regularly ending in riots. Audience members already annoyed with the minimalist arrangements would be further antagonized by Vega, who was known to whip crowds into a frenzy by swinging chains at them mid-performance.Though anarchy and violence were only merely implied in their music, Rev and Vega made their definitive political statement with the ten-minute behemoth ‘Frankie Teardrop’.

Rev’s distorted keyboard washes are not the focus here; rather, it’s Vega’s story of an overworked factory laborer and Vietnam vet (the protagonist ‘Frankie’), who, steeped in poverty and unable to provide for his family, finds no alternative other than ending it all in a murder-suicide.There are no clever bits of dialogue and tongue-in-cheek attitude, as there were on the Velvet Underground’s equally grisly (but intentionally humorous) ‘The Gift’. ‘Frankie Teardrop’ is a harsh, uncompromising sonic picture of total despair. The ultra-spare arrangements are punctuated by Vega’s horrific, borderline inhuman screams that never get any easier to listen to. The entire song has about 6 lines of lyrics, all of which are spaced apart by what seems to be an average of three minutes. Although it’s a powerful listen the first time around, its unnerving minimalism becomes monotonous and dull rather quickly.

The impact this record has had on modern music can’t be exaggerated, especially considering how poorly it was initially received by critics. Suicide created a sound that would influence every indie sacred cow from the Jesus & Mary Chain and Spacemen 3 to Soft Cell and New Order. Subsequent pressings of the album have arguably diluted that impact by adding bonus tracks that don’t fit the album’s mood (“Dream Baby Dream”). That said, the bonus additions also include ‘23 minutes over Brussels’ which, while containing very little in the form of coherent music, provides a rough indication of the timeline of a Suicide concert: introduction, one or two songs, increasingly unsatisfied audience, fight, riot, end of concert. It was ugly, messy and noisy, aka the way punk is supposed to be.