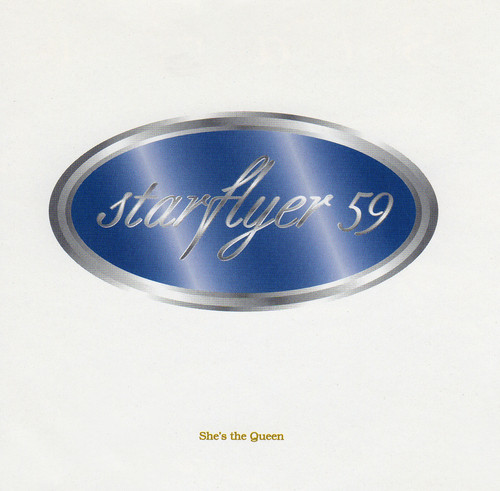 On their full albums, the melodies seemed stifled by their unimaginative use of effects pedals; on this EP, they’ve allowed themselves more breathing room to explore.

Starflyer 59 have the dubious honour of having some of the least imaginative cover art in the unending universe of indie rock. If the single-tone blankness of the art for their first 2 self-titled records (referred to as Silver and Gold colloquially) was too yawn-inducing, you may be pleased to know that the CD of the in-between EP She’s the Queen has added a title and logo, replete with an ugly ‘50s diner font. Hooray.

The title track throws up their trademark grungy wall of sound but closes out with a ferocious feedback blowout, with amps crackling under the strain of pedal distortion. The squalling riffs of “Canary Row” are great too, sounding late ‘80s Love & Rockets, complete with the slightly glam rock take on the Jesus and Mary Chain. “Salinas” is the pick of the bunch, deftly combining guitarist Jason Martin’s love of Johnny Marr’s intricate, jangling melodies and coating it with Starflyer’s trademark blankets of rumbling distortion.

“She was my Sweet Heart” switches gears to a melancholic ‘50s rock ’n roll rhythm a la Ricky Nelson, while the “The Drop” is vintage Starflyer 59, which is to say it’s an unremarkable mishmash of buzzing grunge riffs slowed down by a molasses-thick soup of downtuned pedal distortion. 3 of the tracks are remixes of material off Silver, and really, only “Monterey (Lounge Version)” is an improvement on the original,all of which were fairly dull choices to remix anyway.

Overall, the EP is much more varied and interesting than the band’s full releases during their ‘shoegaze’ era of the 1990s. As Jason Martin himself is quick to point out, Starflyer 59 hewed much closer to alternative rock (think Hum or Smashing Pumpkins) rather than shoegaze. On their records, the melodies seemed stifled by their unimaginative use of distortion pedals; on this EP, they’ve allowed themselves more breathing room to explore their sound.