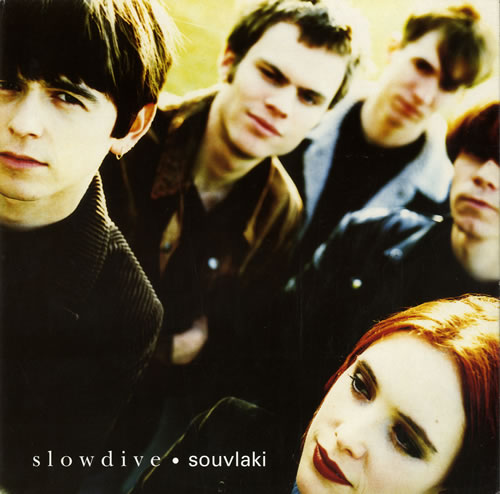 While I lean towards the noisier end of the shoegaze spectrum, I can’t think of any litmus test that opening track “Alison” would fail.

Souvlaki arrived smack dab in the middle of Slowdive’s release chronology; as the achetypal middle record, it sanded away the rough edges of their early work while expanding on their initial good ideas and incorporating influences from sonic blueprints laid by others. The result was a record that made Slowdive synonymous not just with Creation Records, but with dream pop as a genre as well.

While I lean towards the noisier end of the shoegaze spectrum, I can’t think of any litmus test that opening track “Alison” would fail. The distant, siren-like vocals of Rachel Goswell and Neil Halstead float on an enormous, gushing wave of reverb and delay-drenched melodies. “40 Days” and “Altogether” are similarly chock-full of gossamer washes of guitar bliss.

While labelmates My Bloody Valentine focused on obscuring the human elements of their sound with feedback and distortion, Slowdive focused on building their sonic palette around their songs, heavily influenced by the Cocteau Twins, the dream-like chill of The Cure’s Disintegration as well as Brian Eno’s ambient works.

In fact, Eno produces two tracks (“Sing” and “Here She Comes”), both of which foreshadow the band’s shift towards the ambient electronic sound of their final full-length, 1995’s Pygmalion.To be honest, I find myself skipping over these and heading straight for the kraut-rock flavour of “Souvlaki Space Station” and “When the Sun Hits”. Both are towering monuments of cavernous bass and echoing, dream-like riffs that fantastically capture the band’s intricate network of influences, whereas the Eno tracks feel just a bit boring.

Overall, it’s a fantastic album whose influences can be seen everywhere, from Sigur Ros and basically every post-rock band out there, to the vast majority of releases pegged under the “shoegaze revival” category of the late 2000s.