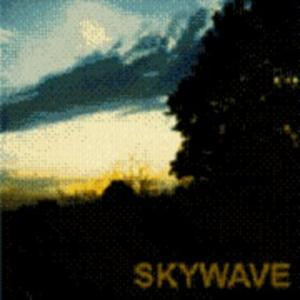 Pop Psychology Nugget #2582: The greats of the world start before they’re ready, and don’t care if nobody else gets why they do what they do. Want to make ‘80s-noise rock influenced music that’s completely out of vogue in the late ’90s? Sky’s the limit. Don’t have a record label? Create your own. No professional recording equipment? Lo-fi it is.

Such was the case with cult shoegazers Skywave, who formed in 1995 at the height of the alternative rock boom, but boldly chose to eschew basically any element that would have made their sound even the least bit palatable to record labels. From their creative loins sprung forth Took The Sun, a limited cassette/CD release issued on their very own Cherry Coated Records. In the pre-iTunes age, self-released material went out of print pretty quickly since bands had to pay to have physical media manufactured to carry their music. As such, the only copies of this record floating around today are pretty likely to be MP3 rips, and you can forget about finding album art at a resolution higher than 300 pixels.

As a debut release, this falls pretty firmly into the “demo tapes” category; it’s very rough in places, but still provides a fascinating glimpse at the band’s musical heritage and hints at the heights they would ultimately reach with their final release, the much beloved (but critically ignored) Synthstatic. Lo-fi noise pop is the order of the day here; Skywave’s sound is clearly indebted to the Jesus and Mary Chain, but includes a healthy dose of the DIY punk aesthetic of Sonic Youth and Dinosaur Jr.

The fuzz-crunch of “Drive” starts us off, with Oliver Ackermann and Paul Baker’s guitars channeling the wheels-falling-off mayhem of Raw Power-era Stooges. Amplifiers hum and squeal loudly in the background, while the simplistic rhythm riffs grind away like a steamroller. It’s all over in under 2 minutes, demonstrating a Ramones-like focus on brevity that also marks other punky cuts like the “Sanddune”. That one has the urgent, muffled drum beats of Jon Fedowitz attempting to keep up with buzzing guitar melodies that expand into wire-thin waves of distortion like what you might hear on Chrome’s low-budget noise/art-punk epic, 1979’s Alien Soundtracks.

‘Walking on Stars’ and ‘Sixteen’ are the band’s love letter to the druggy rockabilly vibes of the JAMC, but with a heavier emphasis on ‘60s influences like Rick Nelson and the Beach Boys. “Walking on Stars” is the stand-out cut on the record, perfectly showcasing the band’s talent for somehow creating the perfect combination of fuzzed-out cooing background vocals, rumbling ‘50s high school dance bass lines and frenetic punk riffs. “Sixteen” is a revamped oldies “dinner and a drive-in movie date” song featuring Somer Browning on guitar and vocals; an expanded, re-recorded version of the song would later surface on 1999’s Echodrone LP.

In terms of vocals, they’re there, but about as non-descript and auxiliary as you’d expect of a noise pop band raised on Joy Division, the Cure and obviously the JAMC. The main focus as always is the guitars, which veer at times towards Sonic Youth-y alternate-tuning instrumental interludes, like on the second half “Mary’s Shadow” and “Sanddune”. In both cases, the interludes find the band experimenting with creating ambient, dreamy atmospheres, which are expanded upon on the gloomy “Die for one more Day”, where Ackermann’s ghostly vocals are mostly submerged by the cavernous reverb of guitars and the deep buzz of the rhythm riff.

There’s certainly enough quality material here to comprise a very solid EP, but some consistency and atmosphere is lost by making this a full-length LP. That said, I’m loath to be harsh here, considering how important the band’s sound was towards influencing the crop of new shoegazers that would dot the indie landscape in the 2000s and beyond.