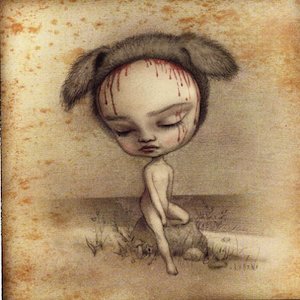 Sympathy for the Record Industry, 2004

The overall aesthetic of the record is "tasteful gothic gloom" as opposed to "generic early '00s angry nu-metal".

A Marilyn Manson protégé side project is about the last place I’d expect to hear shoegaze. Scarling formed shortly after the breakup of alternative rock/industrial band Jack off Jill. While their final release, (Clear Hearts, Grey Flowers, 2000) retained the riot-grrl punk attitude that afforded them their cult following, there were enough hints to indicate that lead vocalist Jessicka was exploring a sound influenced more heavily by Billy Corgan than Mr. Brian Warner.

That vision is fleshed out more fully on their debut mini-album Sweet Heart Dealer. The tracks are layered with a molasses-thick haze of power chords frequently reverbed beyond recognition. Tracks like “The Last Day I was Happy” and “Black Horse Riding Star” celebrate the legacy of Jack Off Jill with half-sung, half-screamed vocals and downtuned “aggro” guitars. But those tracks are infrequent here, as the overall aesthetic of the record is “tasteful gothic gloom” as opposed to “generic early ’00s angry nu-metal”.

“Alexander the Burn Victim”’s crushingly loud chorus riffs and quiet-loud-quiet dynamics reminds me a lot of Disc 2 of Mellon Collie and the Infinite Sadness. The guitar intro to “Baby Dracula” is lifted straight from Kiss Me, Kiss Me, Kiss Me era-Cure. The closing track “Can’t (Halloween Valentine)” is a solid chunk of gothic dream pop, with backing keyboards not unlike those used on Drop Nineteens‘ slacker classic “Kick the Tragedy”. The guitar work is again the highlight, churning quietly during the verses and exploding on the chorus, which only arrives more than halfway through the song’s 7 minute run time.

As a debut record, Sweet Heart Dealer is very solid. It isn’t really a “shoegaze” record, but rather an alternative/gothic production that uses a prog rock approach to guitar distortion. in terms of soundalikes, there isn’t much out there that you can directly compare this to. Maybe My Vitriol’s Finelines, but with the Foo Fighters influence diluted with a little Placebo first.