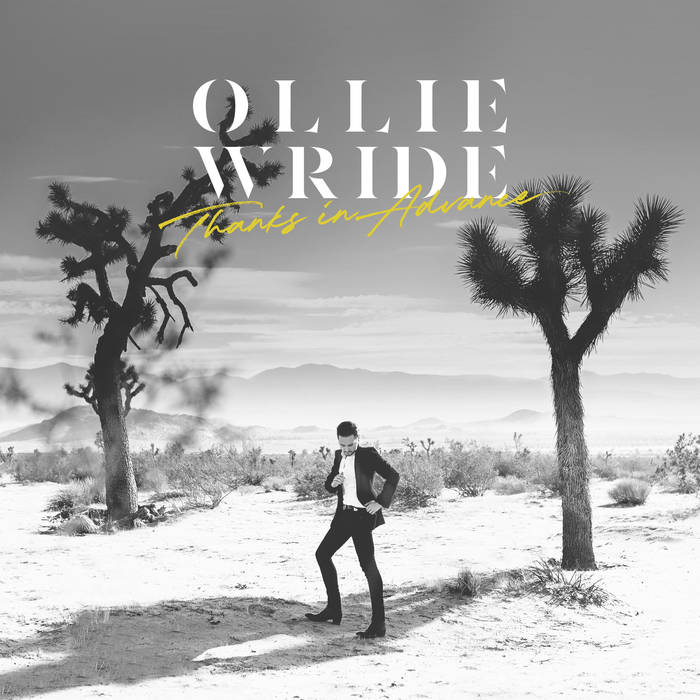 Every once in a while I’ll think of Darren Hayes’ 2003 debut solo single, “Crush (1980 Me)” and its accompanying video. The whole thing is an unabashedly nostalgic tribute to that most neon of decades, with bright synths, falsettoed vocals and heart-on-sleeve lyrics about falling in love at the roller derby or something.

I thought of that song right after hearing Thanks in Advance’s opener, “Never Live Without You”. Like Hayes, who broke up the mega-successful Savage Garden to go solo, Ollie Wride too has something to prove; that he’s more than ‘just’ the vocalist on the iconic FM-84 track “Running in the Night” from 2016.  At nearly 10 million views as of this writing, that counts as an enormously successful single (by synthwave standards at least). ‘80s-flavoured electro-pop has been around seemingly forever, yet only a few pieces of music have managed to capture the wistfulness, desire, innocence and affirmation of that era, however real or imagined. FM-84’s Atlas was one album that did, and Wride’s tremendous vocal performance played a big part in that.

So can Ollie cut it on his own? The early indications are good, as “Never Live WIthout You” and “Back to Life” both have the kind of escapist, anthemic nostalgia trip that fans of his work have come to expect. The slow jamz intro to ‘Luna’, a decent R&B esque ballad, is also a vaporwave sample waiting to happen.

Wride’s singing recalls the showmanship and melody of Spandau Ballet or Hall & Oates, with a bit of Glenn Medeiros thrown in. They’re delicate and soulful at the start, but capable of reaching a crazy register during the chorus. As a result, we are spared the overly deep baritone that acts like Timecop ‘83 and Le Cassette have adopted. All that did was make them sound more like David Hasselhoff than Rick Astley. Also their names are too on-the-nose and make the gimmick far too obvious, but that’s a discussion for another day.

“Believer” benefits from another top vocal performance. But it’s also the track where questions arise as to the quality of the instrumentation and sampling. As anthemic as the chorus is, the track feels far more complete on the futuristic sounding FM Attack remix than the pastel-hued Miami Vice style studio cut.

It’s a decent album; four songs are good, of which “Believer” and “Back to Life” are pretty memorable. But I can’t help but think that a well-placed guest feature or a crowd-pleasing ‘80s cover would have taken this to the next level. But perhaps that was intentional, as most of TIA doesn’t feel like a synthwave album, desperately mining the past to serve its audience’s ravenous appetite for Top Gun references and Blade Runner aesthetics. It venerates the ‘80s, sure, but in the style of more recent acts like Frankmusik and Zoot Woman. And ultimately it faces the same pitfall; the sparkling keyboards and joyful soft rock guitars work wonders on the singles, but can’t carry the sound over the course of a whole album.

There’s a reason “Crush” was so memorable back in 2003; its carefree melodies and brazenly retro video was a one-off; it gave personality to an album that was otherwise full of the formulaic focus-grouped contemporary pop people wanted. Today, Youtube and Bandcamp have created audiences for every possible subculture, so to get noticed, artists don’t have the luxury of bait-and-switch. Audiences expect entire albums of the exhumed remains of the ‘80s, produced by artists with on-brand names like Tommy ‘86 and Miami Nights ‘84 with cover art that crosses Robocop with Akira. Thanks in Advance mercifully manages to avoid most of those cliches.