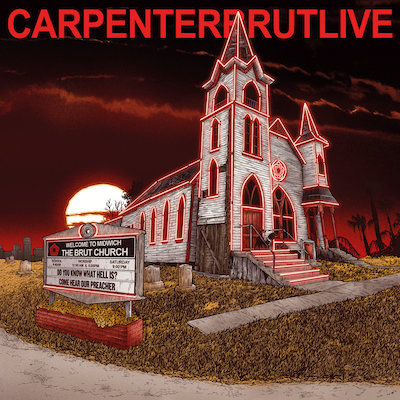 Carpenter Brut’s first live release is a powerhouse of sinewy and tense synthwave. Named after the horror short “Escape from Midwich Valley” which the artist (real name Franck Hueso) scored, this pulverizing live show adopts the adrenaline of punk and the drama of heavy metal to bring a headbangingly muscular brand of dance music to the club.

The French DJ’s first 3 EPs of grimy, menacing synths represented the flip side of a genre that’s better known for soundtracking nostalgic ’80s throwbacks like Drive and Stranger Things. Several tracks from those EPs (compiled and released as Trilogy in 2017) appear in improvised form on Midwich to better showcase their explosive live potential, and keep the tempo at a steady 100mph.

As “Division Ruine” crossfades into the Hotline Miami-featured hit “Roller Mobster”, Hueso disposes with the subdued buildup of the studio version and heads straight for the song’s apocalyptic crescendo, much to the delight of the refreshingly vocal crowd. Similarly, “Chew Bubble Gum” summons the virile, yet nervous energy of a sin-soaked nightclub, with a robotic vocal sample spelling out “L-O-V-E”, followed by a thunderous set of drums that are only slightly louder than the cheering crowd.

“Le Perv”, another hit off the HM soundtrack features a slow-crawlng, supremely evil synth melody, rising and falling like a sine curve next to heavy, droning synth arpeggios. Tracks like these are a great example of what Carpenter Brut does right, which is to give voice to those demanding a soundtrack for our dystopian future, but injecting it with just the right amount of ‘80s horror film cheesiness to make it feel like the cheap thrill it is.

Those influences usually come off well, like on the sinister, Giorgio Moroder style synths that pepper ‘Run, Sally Run!’.  And in case the retro vibe was too subtle, the record closes with a fantastic, thoroughly crowd-pleasing performance of Michael Sembello’s “Maniac” from the Flashdance (1983) soundtrack. The inclusion of live guitars and drums in the performance add enormously to the power of this kind of sound.

Barring a few tracks like ‘Looking for Tracy Tzu’, the tempo never seems to let up, and that’s one of the few shortcomings of the record. Much of CB’s output is intense, aggressive and designed to be played at maximum volume. But on a live record that’s already over an hour long, the initial adrenaline surge begins to plateau halfway through. The EPs provided space to experiment with more ambient rhythms, but those either weren’t picked for the live setlist, or were improvised to sound bigger and louder, making the mix feel overly dense with distortion at points.

The Carpenter Brut sound is just as natural a fit for a strip club as it is for an actual club; it shouldn’t come as a surprise then that several tracks bear hallmarks of Rob Zombie’s tongue-in-cheek satanic aura. Besides that, there are nods to glammy European synth-metal as well; Finland’s Vanity Beach come to mind, as does Norway’s regrettably named Sexydeath,  whose own cover of “Maniac” on the 2004 record The Damiana Error could have provided a launching pad for the version that appears here.

The neon-silhouetted chapel on the cover and the backdrop of a hellish night sky underscores the demon rave spirit in which this album was conceived. By and large, that image as accurate, as CARPENTERBRUTLIVE succeeds at putting a new lease on life for a long-forgotten style of metal-esque electro house that owes just a smidgen more to Andrew WK style self-awareness than to Justice.