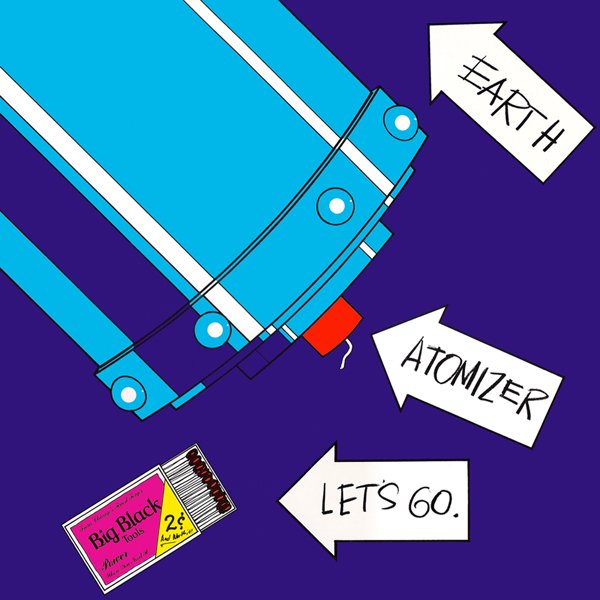 A list of ’80s industrial and noise rock essentials would feel a little bare without Swans, Ministry or Godflesh. But there is one band that is consistently omitted from these lists, and that’s not just because search engines turn their autocomplete off the second you type in their name in full.

Big Black were a punk group at heart, but their novel (and relentlessly anti-commercial) approach to instrumentation, melody and atmosphere built a sound so cold and mechanical that it would became a natural touchstone for industrial and noise rock bands that would form in their wake. Founder and future super-producer Steve Albini played guitar with copper picks, which when struck against the steel strings of his Travis Bean TB500 guitar created a ringing banshee, as though a steel pipe was being severed with a chainsaw.

It is this machine-like frigidity, combined with the band’s punk polemics that gives the tracks on Atomizer their pressure-cooker ferocity. On “Bad Houses”, the programmed, monotonously uniform thud of the Roland TR-606 drum machine sets perfect time for the chiming, wiry riffs that have almost certainly been adapted from The Cure’s “A Short Term Effect”. The spoken word lyrics, barely audible beneath the guitars, neatly describes the self-loathing and denial inherent in addiction: “I hate myself for my weakness /I tell myself I will not go, even as I drive myself there”.

“Passing Complexion” is an inferno of hardcore punk, with Albini’s guitar producing a sound more akin to a jet engine taking off. It’s one of the first songs on the record that showcases the ugly, grinding throb of Dave Riley’s bass guitar. Well, there’s also album opener “Jordan, Minnesota”, but it’s a fairly unremarkable song, and infamous largely because of its lyrics about a pedophile ring in the titular town, which was later discovered to be a hoax.

“Kerosene” is the band’s most iconic song, and that’s because they managed to capture a very specific, thoroughly Midwestern snapshot of boredom, insecurity and isolation in one uncompromising, 6-minute salvo of guitar crunch and amplifier feedback. Albini’s guitar harmonics make the intro sound like wind chimes ringing amidst a dust storm in hell. There is no way to describe the main riff other than a rusted metal meat grinder devouring something also made of rusted metal. Combine that with Riley’s growling, subterranean bassline and Albini’s shouted chorus of “Set me on fiiire, Kerosene!” and you’ve got one of the decade’s most despairing paeans to alienation.

A live version of “Cables” (from 1983’s Bulldozer EP) is included as well, with the TR-606 replacing the live drums of the original. It’s considered superior to the original, but I have to disagree; the first minute of the sub-three minute live cut here sounds like tuning feedback, while the guitars and bass blend into each other compared to the studio version that isolates the instruments better.

“Bazooka Joe”, is a solid tune as well. With its lyrics about grooming a vulnerable military vet to become a contract killer, it’s consistent with the album’s theme: telling stories about humanity’s basest instincts and setting them against a backdrop of metallic cacophony.

Atomizer was Big Black’s first full-length, following a series of obscure singles and EPs released on indie labels Ruthless and Homestead. It would come out just a year before the group disbanded. Guitarist Santiago Durango (previously of Naked Raygun) needed a change of scenery in the face of a seemingly endless grind of playing shows before mostly nonplussed audiences. He went to law school at the University of Chicago and apparently works as an apellate court attorney in Illinois.

Steve Albini would form Shellac and begin producing records. As he became a fixture at punk venues like the CBGBs in New York, he would eventually going on to man the mixing desk for numerous influential records by Pixies (Surfer Rosa, 1988), the Jesus Lizard (Goat, 1991) and Nirvana (In Utero, 1993).Big Black didn’t last long enough to produce a truly essential record, but as Albini’s producer credits suggest, their influence was felt far and wide across the American punk underground. There’s still plenty to like on Atomizer if you’re interested in exploring the annals of ’80s industrial, post-hardcore, and noise rock.