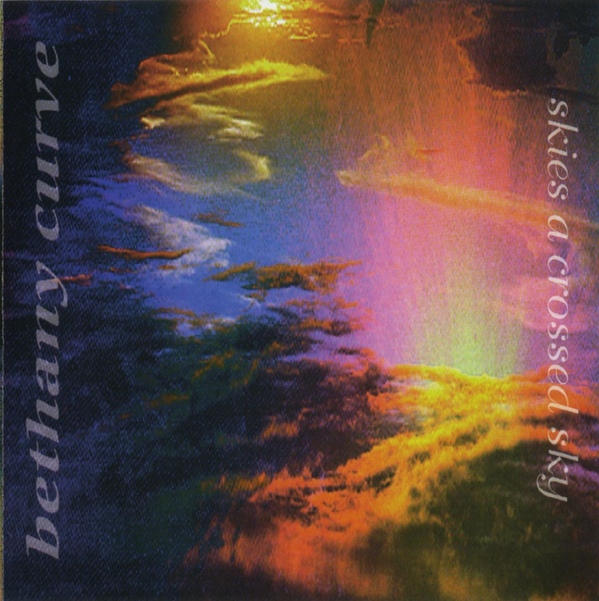 The sound on this record conjures up a fascinating hypothetical where Pornography-era Cure went on tour with the Cocteau Twins and ended up signing with 4AD.

Despite the rainbow-kissed sky on the cover, Skies a Crossed Sky is very much a rainy day album of phaser-pedal drenched melancholy. All 14 tracks feel cold and far away, as if you were listening to an ‘80s college radio station playlist curated by the ghost of Ian Curtis. The 8-minute opener “Vanish” sets the tone for the tracks to follow: the thud of the drums alternate between methodical and glacial, while the guitars, heavily treated with delay and overdubs, float high above the mix, as though surveying a bleak soundscape where the distinction between ethereal and funereal gets very blurry, very quickly.

Slowdive and the Cocteau Twins are major influences on Bethany Curve’s sound. The guitars on “Follow from Swallow”, “Brighter Still” and the instrumental interlude “Mot Juste” all have the liquid sparkle of vintage Robin Guthrie, while “Rest in Motion”, “Troly” and “Spacirelei” are a godsend for those missing the new-age dream pop sound of Slowdive’s pre-Souvlaki material.

Moments when the band break their vise-like focus on crafting oppressively downcast space rock are few and far in between. “Almost Perception” is the closest the record gets to a traditionally fuzzy, upbeat noise pop, while “Door 2416” and “Sandblaster” growl with coarse amplifier distortion.

By the time the loops of machine noise on the closing track fade out, I came to the conclusion that while the album is very solid in parts, its overall length makes it a daunting listen for the first-timer. To be fair, the band has crafted a unique mood here, one that conjures up a fascinating hypothetical where Pornography-era Cure went on tour with the Cocteau Twins and ended up signing with 4AD. Unfortunately the results would be a very mixed bag, as is the case here.