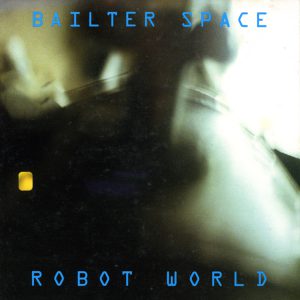 Bailter Space weren’t newcomers to the guitar-heavy noise rock sound that would be perfected on Robot World. In their early ‘80s incarnation as The Gordons, guitarist Alister Parker ran roughshod over the no-wave scene pioneered by Sonic Youth and the Swans.

By the ‘90s however, they had sanded down their atonal edges somewhat and developed a darker, futuristic sound that was equally informed by shoegaze, grunge, dream pop and industrial. Fast-paced tracks like “Begin” and the title track are balanced out with hazy dream-like guitars on “Fascination” and “Make”. Their noise-rock roots are still prominent on tracks like “Ore”, which is nothing short of a lumbering, monolithic slab of distortion.

While the album does lapse into repetition at times (the first two tracks are nearly indistinguishable from each other) it comes off more as a dedication to a singular creative vision rather than laziness. There’s more than a good chance that the members of newer fuzz-rock groups like the Raveonettes, Amusement Parks on Fire and Autolux gave this album a long hard listen before setting out to create their own sound.