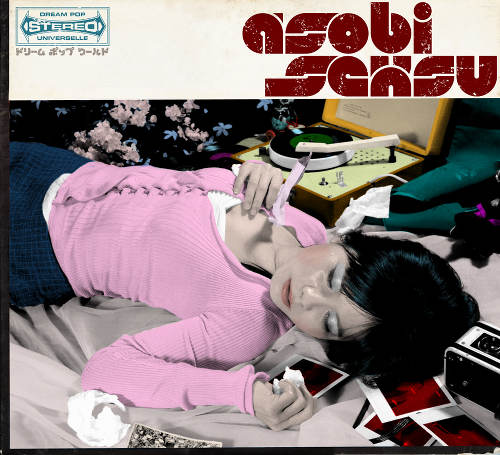 It wasn’t a good time to be starting an “indie” band in NYC in the early-2000s, unless your name was The Strokes or Interpol or maybe even Blonde Redhead. There simply was not enough PR oxygen available for everyone; after all, we are talking about the dark ages of the Internet when bands didn’t even have so much as a MySpace page to publicize, let alone Twitter, Soundcloud, Bandcamp and all the other frivolities the bourgeoisie are spoiled with these days.

Asobi Seksu would self-release this, their debut record in 2002, but it got close to no traction at the time. Thankfully though, 2004 rolled around and the album saw an official release through the Brooklyn-based label Friendly Fire Recordings. The timing seemed fortuitous as well, as a fuzzy dream pop record was a welcome break from the overabundance of Velvet Underground/Nick Drake/Ramones -obsessed indie that was clogging up college radio station playlists.

“I’m Happy but you don’t like me”, titled like a badly translated J-pop single, is the best of the bunch here. it’s a high-energy pop single with Yuki Chikudate’s Japanese vocals nicely overlaid with James’ Hanna’s frantically noisy guitars courtesy of James Hanna. That style appears again on the My Bloody Valentine-referencing track “Sooner”, which is easily the shoegaze-iest cut on the album. Punky tracks like “Umi De No Jisatsu” and “Asobi Masho” are also sung in Japanese, with the latter featuring a scraping, heavily distorted riff that sounds like it was lifted directly from Sonic Youth’s “100%”.

The similarities with Blonde Redhead don’t go too far beyond a shared love of Sonic Youth’s atonal guitars and female vocalists fluent in Japanese. While BR focused on replicating the no-wave cacophony aesthetic of Sonic Youth’s early days, Asobi Seksu is more light-hearted, as they demonstrate on the playful bossanova rhythms of “Taiyo”. The band are their best when they pursue a noisy, uptempo sound.

Unfortunately, the record’s momentum often stalls with too many “slow-burner” dream pop songs that mistake languidness for atmosphere. “Walk on the Moon” is the requisite attempt at a “lush” ballad that largely falls flat but for the mid-song fuzz crescendo. “It’s too late” is similarly structured but features a much better orchestrated feedback outro that lets the listener bathe in the buzzy bliss of Hanna’s BOSS ME-X pedalboard magic.

Overall, the record is a faster-paced but less consistent analogue to Autolux’s Future Perfect, which came out in the same year. Barring acoustic clunkers like “Before we Fall” and “End at the Beginning”, it’s a fun record to listen to. Long term through, you probably won’t see yourself coming back to many of the songs here.