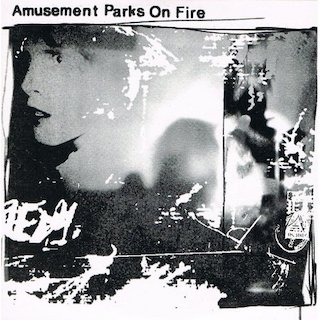 With the onset of adulthood and the annoyances of adult responsibilities, you can’t really give as much of a fuck about shoegaze as you used to be able to. Consequently, you begin developing subconscious filters to try to ensure that the music you do listen to are the cream of the crop.

Band names may be a somewhat superficial proxy for the quality of the music, but for genre matching, its precision is unparalleled. I basically don’t even have to listen to Explosions in the Sky or This Will Destroy You to know that they are full of bearded dudes in plaid. They likely also dabble in the art of 8-13 minute instrumentals with 3 parts gentle guitar noodling and one part ostensibly ear-crushing, sweeping, “epic” riffage certain to evoke a solitary tear to the eye of the most hardened metalhead.

Amusement Parks on Fire probably falls into the same general category, right? Well, sort of. Guitarist (and for this album, solo artist) Michael Feerick looks like he could barely grow facial hair; as he was 19 when it was released, he may actually not have been able to. That said, there are some solid cuts in this 10-track debut that may appeal to fans of Swervedriver, Smashing Pumpkins and even that rarest of beasts, Christian shoegazers Starflyer 59. The mournful, string-laden instrumental “23 Jewels” crossfades nicely into the triumphantly overdriven guitar stomp of “Venus in Cancer”, whose incendiary, Dinosaur Jr.-influenced guitar lines are bizarrely best known for appearing on the soundtrack for EA Sports’ Rugby ‘06. The distorted riffage continues on “Eighty Eight” and “Wiper”, although the wall of guitars does feel repetitive at points.

Like Swervedriver, AMOF’s best moments are tracks with lo-fi garage energy like “Venosa” and “Smokescreen”. The post-rock detour of “Asphalt (Interlude) is good too, mixing a simple piano-with-strings melody with near-muted amplifier feedback slowly being brought in from the background the fore before exploding into a miasma of J. Mascis and Billy Corgan riffs right at the end. Yes, the description is near-identical to the formulaic post-rock I derided earlier, but the blueprint works a lot better when it’s limited to 4 minutes, as it is here.

The spot-the-influence meter here is clearly tilted towards Smashing Pumpkins rather than MBV, but that’s hardly a bad balance to strike. As debut records by 19-year old multi-instrumentalists in the early 2000s go, this could have gone a lot, lot worse. Kudos is apropos.