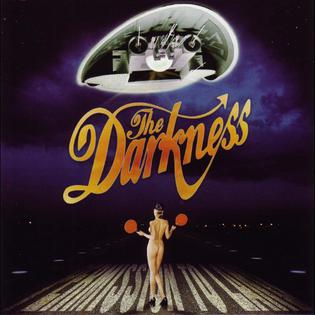 There were lots of things that should have gone against The Darkness on their debut. Guitarist and singer Justin Hawkins‘ teeth were something out of an Austin Powers film. Their on-stage getup would make Def Leppard blush. They played muscular rock ‘n roll but every member looked like a skinny nerd who’d rather be listening to Pavement than doing a split while playing a masturbatory guitar solo.

And yet, they pull it all off brilliantly. In addition to being inordinately dedicated to their gimmick, The Darkness are masterful musicians who know exactly what tweaks to make on their hard rock blueprint to create crossover hits. While “Growing on Me”‘s humorous entendre-ridden lyrics are about contracting an STI, the vocalization and incredible guitar solos would make it right at home in Van Halen‘s back catalog. Hawkins’ Freddie Mercury-inspired falsetto works just as well on a tender ballad like “Love is Only a Feeling” as it does on a barn-stomper like “Get Your Hands Off my Woman”, whose riff was lifted from Nirvana‘s “Stay Away”.

By design, there was no ‘edge’ to their sound, nor did they need one. The lead single (and #1 UK hit) “I Believe in a Thing Called Love” had a Weezer-esque innocence that combined strongly with insanely catchy choruses and solos. There’s an unpretentiously honest feel-good factor that permeates the entire album, and separates them from contemporaries like Jet that tried to tap a similar vein but ended up becoming a douchier Oasis.

They simply don’t make rock ‘n roll like this anymore. I mean, they were massively anachronistic as it was in 2003, when the Strokes and the Libertines were the be and end all of guitar rock. But the UK loves themselves some self-aware pastiche, and The Darkness’ over-the-top flamboyance and irreverent attitudes make for a very fun listen. Highly recommended.