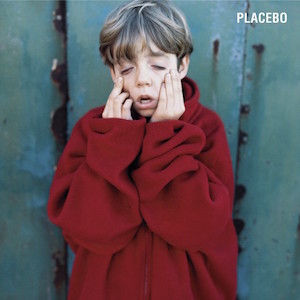 Blessed with a voice that only Geddy Lee’s mother could love, Brian Molko freely vents about unrequited love,  hormonal urges and the ennui of sexual competition in post-Thatcher England on Placebo’s debut release. Backing him up is the towering six-foot something Swedish bassist Stefan Olsdal and drummer Steve Hewitt, the latter  of whom worked as a Formula 1 garage mechanic prior to joining Placebo. Molko and Olsdal met in art school in Luxembourg, which helps give the songwriting a sort of “brooding man on campus with guitar” poetic sheen. Hewitt’s drumming boasts a efficient and professional style you’d expect from someone who has actually had to work for a living at some point in the past.

This hodgepodge of personalities shouldn’t work, but it does, and a lot of that is due to the guitars. Molko and Olsdal stay as far away as possible from the stadium rock “choons” of Oasis and their contemporaries, preferring instead to thrash out fast, atonal riffs closer in style to the American ‘80s underground of Sonic Youth and Big Black. “Bruise Pristine” and “Bionic” are fast-paced cuts that highlight the band’s urgency (and inexperience), while “36 Degrees” punky riffage is the closest the band would come to an anthemic sound on this record.

Don’t get me wrong, the riffs are sanitized somewhat to achieve the catchiness of say, a Smashing Pumpkins single. But where SP’s success came from a combination of Billy Corgan’s guitar wankery and vocal whine, Placebo thrives on industrial/punk distortion and nudge-nudge, wink-wink lyrics about sexual deviancy. How else could a song about gay cruising (‘Nancy Boy’) shoot to #5 on Top of the Pops, a BBC programme so conservative that required every performer to lip-sync on its live performances right up until its 2011 demise?

‘Nancy Boy’ defined the band’s image, somewhat unfairly. It’s tongue-in-cheek (not a euphemism!) lyrics and bouncy riffs, combined with Molko’s public image as a cross-dressing androgyne overshadows the bleak beauty of much of the album. They pull off desperation very well with tracks like ‘Come Home’ and depressed ballads like ‘I Know’ and ‘Lady of the Flowers’. The hidden track appended to the end ‘Hare Krishna Farewell” is a surprisingly lovely instrumental that showcases the band in a rare moment of vulnerability.

The calculated punk aggression of ‘Bruise Pristine’ is nicely balanced with vulnerable moments like ‘Teenage Angst’, which is probably the best possible song that bears that particular title. The live version is a lush, slowed-down piano-driven tune. This attempt to class up the song is ill-advised, as the oscillating guitar riffs and fast tempo of the original nail the woe-is-me attitude mocked in the song.

For a debut, this is surprisingly solid. That said, if you are over 25 and still enjoy this record, you should be aware that your fondness for it most likely stems from how it speaks to the bitter post-adolescent angst you’ve never managed to fully let go of. Wrapped in a sleek, Sonic Youth-influenced sheen however, you can now look at it as “art”, but that doesn’t change the fact that this is still the soundtrack of your furtive wallowing in the pit of despair you’ve created for yourself with your life’s choices.