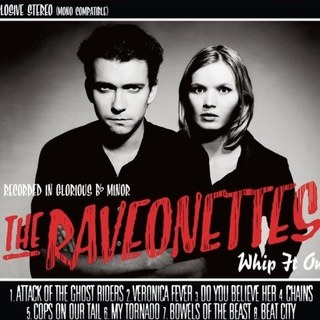 Despite the deluge of early 2000s magazine covers declaring “Rock is Back!” or variants of that sentiment, it has to be said that the garage/lo-fi/indie revival was lacking the kind of rock ‘n roll danger that was synonymous with Iggy Pop’s on-stage self-flagellation or riots at Jesus and Mary Chain shows. While the Raveonettes’ refined Danish sensibilities perhaps wouldn’t allow for such vulgar displays of power, their sound made no such promises.

Guitarist Sune Rose Wagner’s first band Psyched Up Janis started out playing acoustic versions of American rockabilly standards like Buddy Holly and Hank Williams Sr.. But after discovering the seedy psychobilly of the Cramps and the ear-shattering noise pop of the Mary Chain, he switched the sound around entirely with new bandmate and bassist Sharin Foo. No longer were they an oldies cover band you might find at a roadside bar in Twin Peaks. On their debut EP Whip It On, they pursued a dark surf-rock sound marinating in B-movie camp and post-punk tension.

It’s rare to have a record that’s so meticulously designed to evoke a certain mood. Every move seems intentional, from the ‘50s B-movie style black-and-white video for opening track “Attack of the Ghost Riders” to the shrieking amplifier feedback that closes out the final track “Beat City”. The whole thing is recorded in B-minor, giving the guitars a heavy, brassy quality that further darkens the record’s monochromatic gloom.

The tracks do blend into each other, but their raw power is unchallenged by anything else released during this time. The fast-paced riffs have a cold metallic sheen so intense you don’t even mind that “Cops on Our Tail” and “Do You Believe Her” are basically the same song. This ain’t your daddy’s rockabilly revival. Except it sort of is. While The Strokes and others could be said to have copied from their influences wholesale, the Raves exhibited some nuance by ripping off groups influenced by their influences. So while you’ll hear some Beach Boys, it’s really still mostly the Jesus and Mary Chain and a bit of The Gun Club.

The EP unfortunately tops out at a measly 21 minutes, but it wouldn’t be the last of this sort of sound. Single releases for Beat City and Attack of the Ghost Riders in 2002 included B-sides like “Demon’s Fire”, “Go Girl Go”, “Rebel Invasion” and “Wanna Dance”, all of which continued the string of short, furious Cramps-meet-Suicide punk numbers. While these singles were limited edition releases that quickly went out of print, they would later be reissued on 2011’s B-Sides and Rarities.