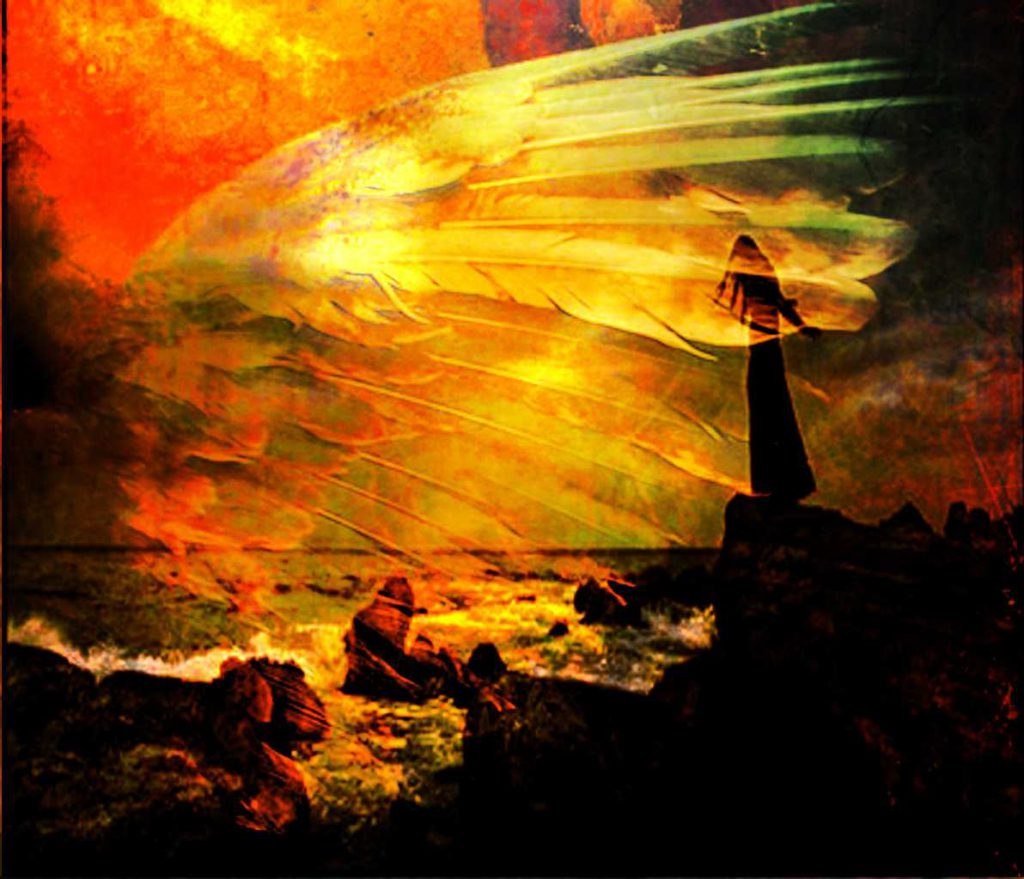 Slow, militaristic drum rhythms over viscous, chugging guitar chords that burst forth into an ear-shattering wall of guitar fuzz.

I’ve long held that album art is a key variable in determining the quality of the record. This isn’t just a realization I’ve had as a pre-eminent thinker in the miasma of aural emotion bestowed with the reductionist euphemism “shoe gaze”, it’s common sense. Surely part of the reason Loveless persists as the be all and end-all of the genre is its impossibly on-the-nose artwork. A guitar Xeroxed multiple times and drenched in the pinkest pink the CMYK spectrum has to offer is about as evocative as its gets. Even without listening to a single note, you can probably pick up on the sexual undertones of the music and the masturbatory overtones of guitar trickery. At least I could, but then again, I’m a savant.

The Angelic Process gets this; a solitary silhouette of a woman stands alone on rocks facing the sea. The translucent wings of a gigantic….”something” are superimposed on the image. Looking at it, you still pick up on the wall-of-sound imagery, similar to Loveless, but the narcotic haze of etheralism there is replaced by a fog of noise finely balanced between heavenly transcendence and apocalyptic hellfire. Looking at it, one cannot help but be struck by thoughts of mortality and the ultimate insignificance of one’s existence.

Actually, none of that is true. At first, I thought this looked like a typically overwrought “metal” cover, drenched with Tolkien imagery and the underlying fetishization of a world where battle axes and enchanted chainmail ruled the day. This was released on a label called “Profound Lore” after all. It’s only after listening to the album that I started thinking more about death, and to a lesser extent, the pointlessness of writing music reviews as a hobby. This album is uncompromisingly and unapologetically depressing.

The almost 10-minute long “The Promise of Snakes” sets the sonic template that’s followed throughout the album almost without any variation. The drums play a slow, militaristic rhythm, over viscous, chugging guitar chords, which burst forth into an ear-shattering wall of guitar fuzz. Because this is technically a “drone doom metal” record, the vocals are screamed, but it’s buried very far back, just like a proper shoegazer record. The atmosphere all of this creates is one of overwhelming despair and hopelessness; like a chasm has opened up in the earth and the vocals are the voices of those being slowly swallowed up into the fiery subterranean abyss that lies beneath.

The song titles help envelope the affair with a sense of doom not felt since the citizenry of Pompeii last felt the ground shake beneath their feet. “Burning in the Undertow of God” begins with ambient guitar notes gently rising and falling, before the death-like thud of drums begin to build up the oppressive sense of dread that cuts through every single track of the album. The jet engine-decibel distortion on “The Resonance of Goodbye” reverses the order, with an ambient interlude offering a few moments of tranquil beauty halfway through the track’s 5-minute duration before diving back into the searing hellscape of overdriven guitars once more.

Moments of respite are few and far in between, and that’s unfortunate, because the band clearly has a knack for crafting moments of ambient magic. The 8-minute long “Dying in A-Minor” for example starts with what sounds like a lo-fi faux-orchestral take on Sonic Youth‘s “Freezer Burn”, with the whispered vocals of guitarist K. Angylus holding a melody. These few moments of variety only serve to showcase how similar the guitars sound on every single track, and make the album feel far longer than it should. Without the mournful keyboards adding an element of funereal grandiosity to the above track and “Burning in the Undertow of God”, every track would sound like being buried beneath a wall of guitar amps exploding in slow motion. It sounds cool, but wears very thin by Track 3. Only the title track can boast of a genuinely exciting staccato riff, coated in ugly distortion, and even then, it only pops up right before the end.

The best track on the record is “Mouvement: The Smoke of her Burning” and “Million Year Summer”. “Mouvement” features a gorgeous drone segment that finally manages to pull together all that is great about the band’s influences (Swans, Godflesh and My Bloody Valentine) and puts put forward a genuinely moving piece of music. It doesn’t hurt that it comes in at just over 4 minutes.

I wanted to like this album, if only because I feel there isn’t much at all in the shoegaze catalogue that reflects the pitch-black hopelessness that the first few Swans records exemplified. Like Swans though, Weighing Souls with Sand is definitely a challenging listen, and there are a few inspired moments here that make it worth the listen. The majority of shoegaze revival material out there often feels like a beauty contest, with artists judging themselves on whether their melodies are “gossamer” enough. There’s something to be said for an independent release that goes so far the other way as to eschew even the merest hint of being picked up for one of Spotify’s “evening chillout” playlists. It’s far from perfect, but Weighing Souls with Sand captures a mood more thoroughly than any other record I’ve heard recently.