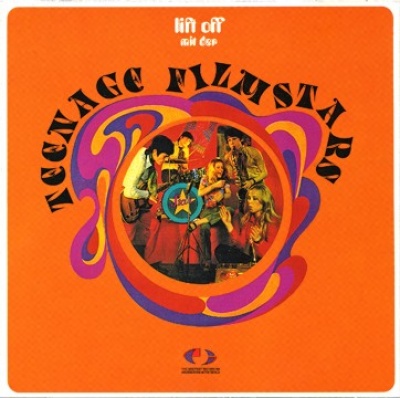 I listen to this record sometimes and wonder if Alan McGee, fresh from an opium-induced slumber, decided that it wasn’t enough to have My Bloody Valentine, Slowdive and the Boo Radleys all churning out dreamy clouds of guitar fuzz on his label. No, what was needed was another band that did all those things while pretending the year was 1969.

And thus we have psychedelic space rockers Teenage Filmstars. The first half of the record is pretty solid, with the TF mixing reversed vocals (female and wispy, as per), swirling guitar loops and vaguely Eastern rhythms into their psych-shoegaze stew. “Inner Space” and “Apple” are actually pretty solid semi-instrumentals, while “Kiss Me” and “Loving” have propulsive basslines behind their shoegazer wall of sound. Unfortunately, the second half gets dragged down with that ol’ psychedelia bugaboo that is the meandering jam session. “Flashes” and “Soulful” are way too long, while closing tracks “Hallucinations” and “Moon” while satisfactory on the fuzz levels, are nonetheless indicative of a band in the initial stages of phoning it in.

Also, the back cover has track titles written in Bengali (dat South Asian mysticism) and as a native speaker, I can tell you that only “Apple” and “Moon” were translated correctly. Because I’m nice, I’ll only dock them one point for that.