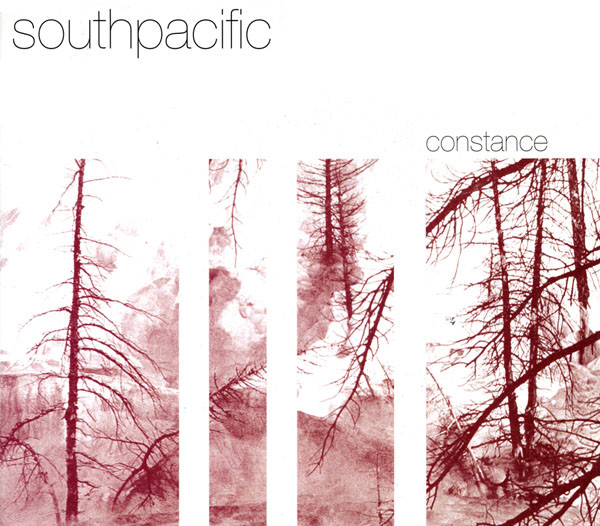 Short on vocals, long on drone-heavy post-rock atmosphere, Constance touches on several elements of dream pop and shoegaze across this mammoth 14-trackrecord. It’s not exactly the type of record I’d include on a site like this; I like my shoegaze to be loud, in-your face and with needles-in-the-red levels of coarse distortion. Stylistically however, Southpacific isn’t too far removed from the melancholic dream pop of Bethany Curve (who always seem to pop up in these discussions, in spite of failing my totally arbitrary shoegaze litmus test). So, in order to be fair and representative, I present to you: this review.

The band are big fans of Bailter Space, which is a definite plus in my book. Not only is their label (Turnbuckle) home to most of Bailter’s late ‘90s releases (the Capsul LP and Photon EP), but tracks like “Blue Lotus” and “Round (Forget what you Feel)” have that telltale style of solid, chunky riffs frayed at the edges with distortion. “Pintail Gate” and “Automata” are post-rock affairs, combining the echoing hum of amplifier reverb, crunchy rhythm guitars and a slight krautrock influence that was likely picked up from the band’s adoration of groups like Bowery Electric andSeefeel.

Unfortunately, the album quickly becomes tedious to listen to past the first half. At 14 tracks and 70 minutes, the record is simply far too long to remain compelling throughout. With no vocals aside from the tepid “Built to Last”, tracks blend into each other in a blurry mess of ambient drones and new-agey dream  pop that moves along at a snail’s pace. The pulsing basslines of “Parallel Lines” and ebbing waves of distortion on “Alamo” are quickly forgotten after a barrage of indistinguishably dull clunkers that makes up the latter half of the album like “Aria”, “Stay Ahead, Far Behind” (what?!), “A Better life Since”, and a few others.

While Constance certainly has its moments, it is unfortunately exactly the sort of record that makes people’s eyes roll when they hear terms like progressive/space rock/math rock/post-rock etc. More dull, than not, hard to get into, and with little payoff.