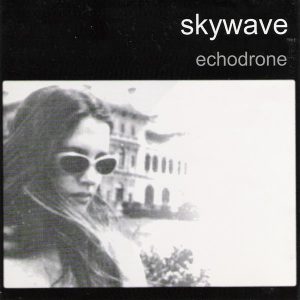 Fuzzy rockabilly tunes that aren’t remarkable, except for maybe their uncanny resemblance to the Jesus and Mary Chain on Barbed Wire Kisses, right down to the ultra-bored vocals and primitive Moe Tucker-style drumming.

Skywave clearly has a near obsessive fascination with the Jesus and Mary Chain, but it’s too simplistic to call Echodrone their “Darklands”, i.e. a sophomore slump record with a bunch of sad-man songs and nary a guitar amp explosion. The fact is, they’ve always been a loud band and that’s a style that can be, shall we say, polarizing. Having been told at various points by gig organizers “I’m going to kill you” and “Get the fuck out of here”, it’s likely they took the opportunity to explore their introspective songwriting side on this release.

Openers “Under The Moon” and “Sixteen” hark back to the halcyon days of sixties girl group pop, as interpreted by soul-deadened suburban teens. “Sixteen” first appeared as a rough demo on their 1998 debut “Took the Sun”, but this is the superior recording, as it closes out with a dreamy ambient guitar passage, featuring the reverb & fuzz mechanic the band would master on later recordings.

“Baby It’s Just You” is similar in mood, but the formula starts to wear pretty thin at this point. Like the JAMC, the band are at their best when they strike a balance between the carefree melodies of yesteryear pop and the depressive vibe of ‘80s British post-punk, and this track just feels very formulaic. Thankfully, “Nothing” comes in to save the day with its “just right” sheen of razor thin fuzz underlying its doomy, Cure-style watery basslines. Usually the mood Skywave tries to set with these songs is along the lines of “Stay away from me girl, I’m a rebel”, but what we’ve got here gives off more of a “I will end both our lives in an elaborate murder suicide” vibe.

“Slow in Space” and “All I Had” work surprisingly well as moody, lo-fi semi acoustic tracks focused on the type of heartbroken melodies and lyrics that John Fedowitz and Paul Baker would later specialize in after forming Ceremony. “Got that Feeling” and “Get the Girl” are fuzzy rockabilly tunes that aren’t remarkable, except for maybe their uncanny resemblance to basically anything the Jesus and Mary Chain wrote on Barbed Wire Kisses, right down to the ultra-bored vocals and primitive-beyond-belief Moe Tucker-style drumming.

The record closes out with “Girlfriend’s Dead” (possibly the Skywave-iest title ever) and “In Your Eyes”, both of which do away completely with the melodic feel of the rest of the album and go in hard for distortion and noise. “In Your Eyes” does this especially well, with a 2-minute rush of thunderous drums of 100mph fuzzed-out piss and vinegar guitars.

The dreampop band Drone Dimension (active around the same time) have admitted a deep love for this record, but personally, I can’t help but think the fucked-up, feedback-from-hell aspects of Skywave are what makes them such a compelling listen. Burn twice as bright, half as long, and all that. This is the sound of a band trying to stretch its capabilities, and it doesn’t always come off. That being said, anything that played a role in the development of Synthstatic, their towering magnum opus, is all right in my book. I just have not felt the need to come back to this record all that often.