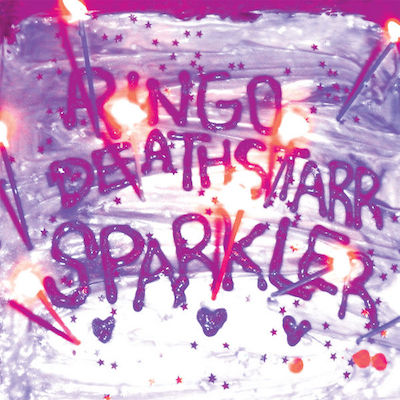 It’s advisable, if not always possible, to sign with a record label that gets your sound and can effectively distribute it to a like-minded audience. Of course, not everyone can meet the selection criteria of fuzz-friendly labels like Clairecords or Slumberland. Plus sometimes you just want to get your sound out there, and worry about the details later. The latter was the route taken by Austin, TX- noise-poppers Ringo Deathstarr for their self-titled debut EP, released through the tiny Manchester-based label Spoilt Victorian Child in 2007.

Unfortunately, SVC only pressed 200 copies of their Psychocandy-inflected tunes (and even fewer of an accompanying 7″) before dissolving. Understandably upset with the lack of exposure, the band would eventually decide to capitalize on their success in building a Japanese fanbase, and re-release the EP in 2009 as a compilation that included some Japan-only tracks, and call it Sparkler.

While their full-length debut Colour Trip (2011) was a noisy yet refined homage to ‘90s shoegaze, Sparkler is very much a scrappy lo-fi affair reflective of a young band in thrall to their influences, namely NME’s cult C86 twee pop mixtape and the chainsaw hiss of the Jesus and Mary Chain. There’s also a fair bit of My Bloody Valentine here, specifically the band’s own mid-80s twee phase, sandwiched between their humble beginnings as  a goth pastiche of the Birthday Party and the “elder statesmen of shoegaze” status they would later achieve.

The EP portion is short and sweet, with “Swirly” and “Some Kind of Sad” blending Elliott Frazier’s raspy, William Reid style vocals with sugary dream pop melodies gently floating in the background. “Starrsha” and “Down on You” are jaunty twee pop numbers borne of repeated listens to MBV’s Sunny Sundae Smile and Paint a Rainbow EPs.

The extra tracks are thematically split between MBV’s softer moments and the punkier side of latter-day Jesus and Mary Chain. Bassist Alex Gehring’s lush vocals take center stage on “Summer Time” and “Your Town”, both being lightly distorted slices of sweetness and light that aren’t too far removed from the sophisticated atmospherics of “Cigarette in Your Bed”.  The remaining tracks up the tempo considerably; “In Love” sounds like an unreleased cut from Honey’s Dead, down to the note-for-note imitation of William Reid’s vocals (in particular the “Hey, hey, hey” choruses), chunky guitar riffs and ’90s dance-rock drumming. “Rats Live on Evil Star” pumps up the volume further with a woozy mashup of Gehring’s propulsive, distorted basslines, Frazier’s guitar squalls and a rush of MBV-style reverse-reverbed guitars.

Put together, Sparkler is a supremely catchy, free-wheeling glimpse of Ringo’s early sound, and a compelling mini-album to accompany Colour Trip. While the crop of 2000s nu-gazers certainly aren’t short of MBV/JAMC devotees, Sparkler is a welcome trip down the path less traveled, namely the poppier side of MBV and the more muscular, “rock” side of the JAMC.