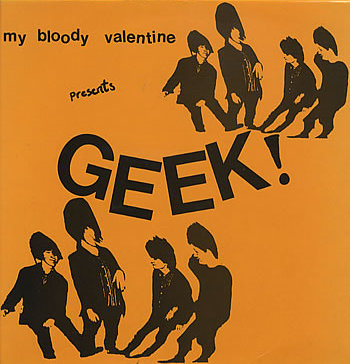 Kevin Shields refers to this phase of the band as ‘quite horrible’. I think there are some promising ideas here, but seeing as how the trap god of druggy shoegaze has spoken, I will gracefully defer to his opinion and proceed to dismember his work accordingly.

To be fair, “What…is this?” is probably a normal person’s reaction to hearing this EP for the first time. It certainly doesn’t sound like, well, anything that MBV did afterwards, and we’re not even talking about when they joined up with Creation in 1988 and began mashing up Cocteau Twins records with literally any kind of industrial machinery they could lay hands on.

Here, we have MBV in simpler times, when they’d claim fairly innocuous influences like the B-movie psychobilly of the Cramps and the harrowing (or was it heroin?) post-punk of The Birthday Party, but end up sounding like something else entirely. The whole EP fizzles with a cheap lo-fi hiss befitting of the creative vision of the founders of Fever Records, the aptly named “Kill Ugly Pop”.

Songs like “No Place to Go” and “Love Machine” have a twee-style energy not unlike genre forerunners Dolly Mixture, but as with most of the material here, the melodies are frequently marred by the comically overdone vocals. Again, this was a few years before the band realized they could use their guitar cacophony to push vocals all the way to the back. As of 1985 however, vocals were the sole domain of erstwhile member Dave Conway, who tries his best to affect a cross between the ungodly howl of Nick Cave and the swamp-monster croon of Lux Interior, but just ends up sounding like a bad Elvis impersonator in a mop top. Perhaps Conway was overcompensating for having such a ploddingly average surname; after all, everyone else in the band had far more exotic sounding names like Ciosoig, Googe and Shields.

Truth be told, by the time you get to “Sandman Never Sleeps”, you’re probably no longer even paying attention to the music but chuckling instead at the EP artwork, which falls somewhere between “any 60s prog cover ever” and “Pantera’s Metal Magic LP” in terms of how abysmal it is. Why is Conway pictured halfway through the gang-member snap dance in Beat It? Why is Shields portrayed as wearing a beefeater’s hat? Why are Ciosoig and Googe recoiling in horror? Oh wait, that makes total sense.