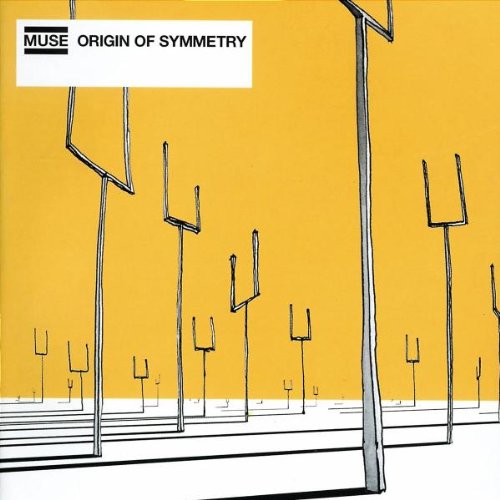 In a nutshell, Origin of Symmetry details the surrealism of human isolation in a society powerless to stop the increasing dominance of technology in our lives. I’d praise its originality, if it were not for the fact that this record is not called OK Computer and the band is not called Radiohead. Not that Muse don’t try, though: the sole strength of their 1999 debut Showbiz was how similar it was to old-skool guitars-and-drums (with the occasional keyboard) Radiohead, while their pseudo-mentors were busy alienating their fan base with the minimalist electronic adventures of Kid A and Amnesiac.

Vocalist Matt Bellamy sounds like Thom Yorke crossed with Jeff Buckley, right down to the impromptu falsettos and the stratospheric Freddie Mercury-esque pitch, while drummer Dominic Howard and bassist Chris Wolstenholme pound out rhythms at satisfactory decibel levels. Nothing really distinguishing the two, then, save for the fact that Radiohead had constructed two near-flawless records back to back, while all Muse had to their name was a less-than-perfect carbon copy of The Bends. So, upon its 2001 release, the best Origin of Symmetry could have hoped for was to help its audience forget that the band they’d rather be listening to instead had forsaken them.

That pre-conceived notion is the best thing about hearing the album for the first time. For it is in those first few moments that the band forever sheds the spectre of Radiohead and takes to the stars. Witness the opener New Born: the tinkling piano giving way to a chainsaw guitar so relentlessly catchy, it begs to be rewound repeatedly, just to relive that virgin adrenaline rush. It’s one of the strongest first cuts I’ve heard in a while, superceding both ‘Smells like Teen Spirit’ and My Bloody Valentine‘s ‘Only Shallow’ in one fell swoop by combining the punk-guitar ferocity of the former, while maintaining the art-rock sensibility of the latter. The grandstanding continues on tracks like the magnificent Bliss, its more traditional guitars and less traditional electronic arpeggios making it a thoroughly compelling listen and richly earning its status as a mainstream hit.

Bellamy’s budding keyboard skills, only fleetingly exhibited on Showbiz, are more fully fleshed out here; his Rachmaninoff-on-acid sound blends seamlessly with the harsh guitar wash of their now-trademark electro-rock style. The pitch of Bellamy’s majestic voice can reach amplitudes Thom Yorke could never dream of, and he makes no effort to hide them in the (just barely) radio-ready singles ‘Feeling Good’ and ‘Plug In Baby’. The clincher, however, is the sprawling, multi-segmented Citizen Erased: it’s astonishing how Muse’s combination of crashing guitars, vocal theatrics and the odd keyboard arrangement can make a seven-minute epic flit by like a three-minute pop jingle.

Though the baroque melodrama of ‘Microcuts’ almost steals the show with its deathrock-opera posturing and pounding thrash-punk conclusion, it should be noted that the record is not composed entirely of self-indulgent grandiosity. Perfectly positioned after the chilling ‘Space Dementia’ is ‘Hyper Music’, resplendent in its hi-octane, overdrive-pedal driven simplicity. Tucked away near the end is ‘Dark Shines’, the goth/surf guitar hybrid mixing repressed lust behind its melodic despair If you’re still looking for the faintest hint of optimism here, you can stop reading; even a rendition of Nina Simone’s cheery ‘Feeling Good’ is given a Portishead/Suede-esque subversively sexy melancholic polish.

The organ-heavy ‘Megalomania’ closes the album, giving it the hallmarks of a record we’d normally love to hate: laughably over-the-top, relentlessly histrionic angst from bored English country boys. But they’ve made a masterpiece out of something that history may have looked upon as an embarrassing sojourn into arty pretension. True, it’s overblown, emotional and appallingly depressing. But you need to own it, unless you prefer not to writhe on the floor in orgasmic ecstasy to its devastating soundscapes, in which case I regret to inform you that you were never alive in the first place.