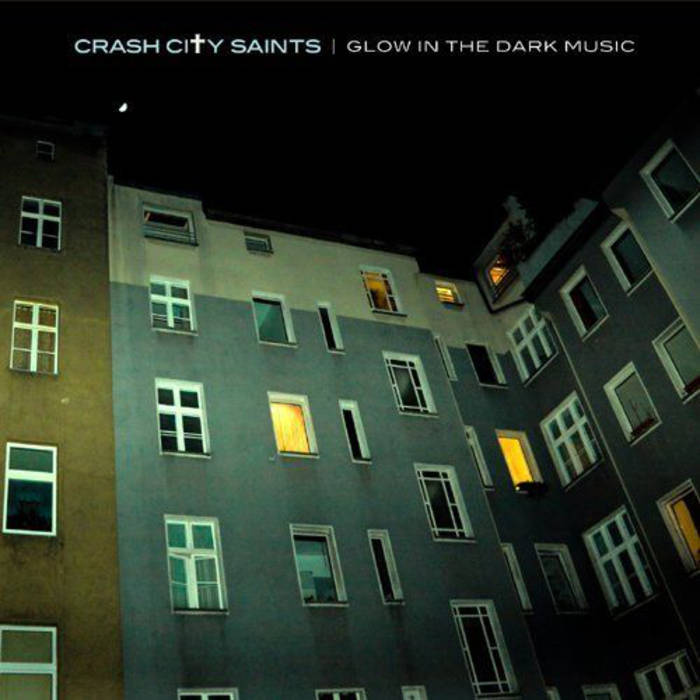 Glow in the Dark Music

Unsurprisingly for a group that dubs their own sound a “sandblaster filled with sugar”, Crash City Saints churn out a honey-coated racket that would make the standard-bearers of white-hot distortion sturm und drang proud. Although the band has been around in various forms since 2002, Glow in the Dark Music is their first official full-length, released by Japanese label Quince in 2010. It pulls together material from their two previous self-released records, Returner EP (2007) and The People were Even Stranger (2009),  the former appearing in re-recorded form with significantly better equipment.

What’s most satisfying about CCS’ sound is how effortlessly they mix power pop melodies with the firepower of what seems like a thousand effects pedals all pushed to their breaking point. While the brilliance of bands like Skywave and Ceremony lay in their pitch-perfect worship of MBV and JAMC, it did sometimes feel like their obsessiveness with achieving that perfectly lo-fi ‘80s post-punk hiss held them back ever so slightly. Crash City Saints avoids that fate by limiting the retrofication of their sound. The guitars on “Dissension Party” for instance roar with the decibels of a jet taking off, while maintaining a catchy melody with deep, rumbling basslines.

“Let’s Be Honest” is built on a similar foundation; a colossal wall of distortion buzzes throughout the track, with the melodies and vocals layered on top. “Council of Elders” takes the distortion down a very small notch, but its opening riff somehow still manages hit a rich vein of woozy pedal distortion before mellowing out somewhat. “Out of the Storm” is an homage to the trademark warm guitar rush of Slowdive.

While the record is missing a couple of the poppier tracks off “The People Were Even Stranger”, namely “The Midwest Scene” and “Christmas at Ground Zero”, there is plenty here to keep fans of the punk-pop-gaze sound entertained. “Every Face is a Mirror” bursts out of the gates with a punky, fast-paced beat before the riff gracefully transforms into a swooning ode to the pedal-chained, swirling sonic miasma that nails the indefinably druggy beauty we usually associate with shoegaze. “Teenage Crimewave”, featuring the ghostly vocals of Sara Maidment growls with a distorted bassline and a grungy riff that wouldn’t sound out of place on the indie-rock soundtrack of a late 90s teen movie.

The latter portion of the record as mentioned reprises 2007’s Returner EP, and is very solid as well, sounding often like what would happen if MBV, Astrobrite and Lilys released a split EP. “Cough Syrup” like its namesake overlays tremolo-bending guitars on thick, viscous slabs of distortion. “Teen Age” lifts a heavy influence from MBV’s Glider EP, generating staggering levels of piercing distortion over cooing, semi-coherent male/female vocals. It’s like slowly falling into a codeine-laced slumber, as described by a man who has no idea what codeine feels like. “Returner” is a fast-paced, almost aggressive slab of deep-dish distortion-laced rock. The album closes with a previously unreleased track “Keep Your Dreams Alive”, which runs for 7 minutes and and feels suspiciously like the band had been listening to Andy Weatherall’s remix of Soon one too many times.

A lot of bands seem to have a distinct problem with referring to their music as “shoegaze” or even so much as conceding that they ever even listened to My Bloody Valentine or the Jesus and Mary Chain. Crash City Saints is not one of them. Not only do they happily profess admiration for the liquid melodies of Robin Guthrie (Cocteau Twins) and the 4-track recorder squall of Brad Laner (Medicine) in equal measure, but they’re also big fans of revivalist noise pop groups like Ringo Deathstarr. Glow in the Dark Music, while long overdue, is a fantastic glimpse of what shoegaze fandom should sound like. If there was any criticism of the record to be made at all, it’s that it would be even stronger as two separate releases, as 15 tracks is a lot to get through. But given the band’s constant lineup changes and lengthy hiatuses, I’d rather have it all neatly packaged and recorded properly, than not have it at all.