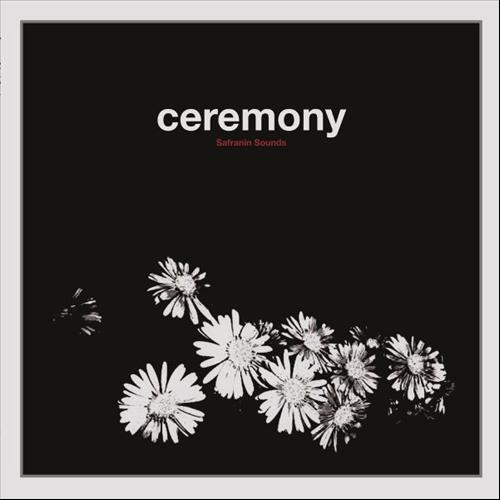 When the Psyschocandy-obsessed shoegazers Skywave parted ways, guitarist Oliver Ackermann moved to New York to pursue A Place To Bury Strangers.  Paul Baker, the other Skywave guitarist, stayed in Virginia and recruited Jon Fedowitz to form Ceremony. Safranin Sounds, named after their original record label, is a compilation of their 2005 self-titled mini-album and the 2007 full-length, Disappear.

Ceremony aren’t interested in moving the needle too far from what gave Skywave its cult following. “Too Many Times” could easily have been on Barbed Wire Kisses, for example. Large chunks of the album are similarly dedicated to pop melodies rooted in ‘50s rockabilly and girl group harmonies, slathered in loud distortion and blank, almost cheesily self-pitying lyrics, as on “Never Love Again” or “Without Your Love”. The latter combines the staring-at-the-walls teenage angst of Big Black with the needles-in-the-red, ear-shattering feedback of the Raveonettes’ “Beat City” (Whip it On, 2002). Other times, they’re happy to strip away the snarling feedback and go full-on romantic with chiming, near doo-wop melodies on tracks about lost love like “Cold Cold Night” and “Marianne”.

If it weren’t obvious from the band’s name, Ceremony does share a predilection for the bleak cold-wave atmosphere of early New Order-style ‘80s synthesizers. This is apparent on the gloomy “Our Last Goodbye” and “Eurotrain”,  the latter of which could be the theme music for Christiane F, which if you don’t know, was a deeply depressing 1981 film about the Berlin drug scene, with random cameo appearances from Bowie performing live renditions of songs from Low.

Skywave’s sound struck a balance between Ackermann’s love of lo-fi garage rock and Baker’s focus on melody. Ceremony naturally leans more heavily toward the latter. This means that the album has some great, fully-formed songs on it that go beyond the note-for-note worship of the Jesus and Mary Chain that Skywave might be accused of. “No Good for You” brings to mind the melodic guitars of short-lived Creation Records dream-poppers Adorable, while “Old” brings to mind William Reid fronting House of Love, with a gorgeously soaring, fuzzed-out outro.

It must be said that the albums feel more consistent as individual releases than as a single 20-track behemoth. But as both releases are out of print, Safranin Sounds turns out to be a pretty fantastic example of nu-gaze (ugh) done right; a record that introduces new elements into the genre’s sound while retaining just the right amount of familiarity so as not to discourage purists.